Patient advocates and patient advocacy groups play a critical role in helping patients, survivors and caregivers achieve better outcomes. We want to highlight these important stories that have made a difference in your world. Below are just a few of the powerful stories shared by members of our Georgia Bio Patient Advocacy Alliance.

Do you have a story to share? Send your video clip or written testimony to Ashley Haltom at ahaltom@gabio.org to be featured here, on our social media outlets, and during our Patient Advocacy Summit!

Hello, my name is Heidi. I have lived with the pain and disability of rheumatoid arthritis (RA) for the past 49 years.  When I was first diagnosed at age 15, treatments were not what they are today.  For this reason as well as living a long distance from a medical center, I didn’t have access to adequate treatment for many years, causing severe pain and deformities in my joints with overwhelming fatigue and always feeling sick. It was a far cry from the active life of a teenager and young adult I hoped for. In later years I needed surgery to be able to walk without awful pain.

Over the years, I’ve been on many treatments that barely helped me. The game changer came when I began taking a biologic. It was my “miracle drug” – less pain, fatigue, sickness and more energy.  Unfortunately, after 12 years I needed to change treatment but the financial burden made it impossible for me to afford a new bio drug.

In order to receive treatment I entered in a clinical research study. Having access to an effective biologic was critical for me. Although life changing, biologics are very expensive medications, even with insurance I got off to a rocky start with the trial but in the end it was a positive experience.  As a study participant, I had the opportunity to be part of medical history, all the while in a professional and safe environment and at no cost to me. I can’t go back and make up for lost years, but I can do my best with moving forward, helping to mitigate further joint deformities, and that is what being be a participant in this study has allowed me to do.  For that I will always be grateful. 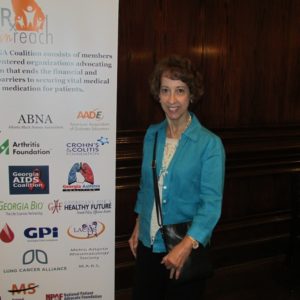 In 2005, Flecia, now 57, was working full-time as a massage therapist. She had just gotten her license, and she was thrilled to be doing work she loved. She bought private health insurance for herself and was, in her words, “healthy as a horse.”

But the lump she found in her breast turned everything upside down. On December 23, 2005, Flecia was diagnosed with a very aggressive type of breast cancer. She quickly found out that not only would it be impossible for her to pay her $10,000 deducible, but many of the medications and treatments she would need to fight her cancer diagnosis would not be covered by her insurance plan.

Flecia called the American Cancer Society for help and was advised to apply for Medicaid. She was approved for the program almost immediately. Flecia is beyond grateful for the coverage Medicaid offered: “If it hadn’t been for Medicaid, I wouldn’t be here today.”

Medicaid paid for all her chemotherapy, surgeries, and other treatments. Because of the aggressive nature of the cancer, Flecia’s treatments were strong, and she had “every side effect known to man.” There were days where she couldn’t get out of bed, and she was in constant pain.

But Flecia kept fighting, and she is now cancer-free. If she hadn’t been able to get her health insurance through Medicaid, Flecia knows she wouldn’t have been able to afford the treatments that helped her survive cancer. “Medicaid saved my life,” she said.