Join us for a virtual town hall meeting with US Senator David Perdue to learn about what is going on in Washington in the continued response to the COVID-19 crisis, next steps in business recovery & reopening plans, and insights into what is coming next. The format is 30 minutes in length with time allocated to answer questions. Moderating the discussion is Georgia Bio President & CEO Maria Thacker-Goethe. 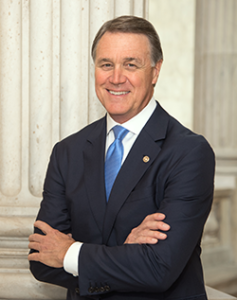 David Perdue is the senior United States Senator from Georgia. David has over 40 years of business experience as the former CEO of Reebok athletic brand and Dollar General stores, where he created thousands of quality jobs and helped working families make it from payday to payday. David was born in Macon, Georgia, and raised in Warner Robins where he grew up working on his family farm. Both of David’s parents were school teachers, and from an early age David was taught the importance of hard work and a good education. At Georgia Tech, David earned a degree in industrial engineering and a master’s in operations research while working warehouse and construction jobs. After graduating, he married his wife Bonnie, whom he had met in the first grade, and they have been married for 46 years. Prior to his decisive election to the U.S. Senate in 2014, David had never held public office and was inspired to shake up Washington and change the direction of our country.